Eastside Catholic at last finds an easy way to win

Special to The Seattle Times

BELLEVUE — The Eastside Catholic Crusaders didn’t need walkoff heroics to win this game. In fact, they didn’t even need to bat in seventh inning to defeat Timberline of Lacey 5-1 in the second round of the Class 3A baseball tournament Saturday afternoon at Bannerwood Park. 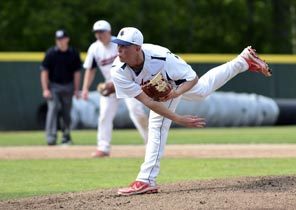 “It’s been a crazy two weeks,” Eastside Catholic coach Kyle Larsen said. “It’s been really, really fun and luckily we’ve been on the good side of things and today was just another one of those days.”

The eighth-ranked Crusaders (18-5) will play fourth-ranked Kelso in the Class 3A semifinals at 1 p.m. Friday at Gesa Stadium in Pasco.

All three of Eastside Catholic’s games before this one ended with walkoff hits — the first two with home runs by senior shortstop Jeff Bohling in extra innings, and the last one on a bases-loaded infield single by freshman outfielder Addison Hull earlier in the day.

“Our bats came alive and we scored some runs,” Larsen said. “We got a little breathing room and I could finally relax.”

An early run by Timberline (15-7) left Eastside Catholic trailing going into the bottom of the fourth inning, when the Crusaders, led by junior Hayden Meier, strung together some hits and put two runs on the board.

“I just went up there trying to hit the ball,” Meier said. “I knew that my teammates behind me were going to hit me in, so I didn’t try to do too much.”

Meier was 3-for-3 and drove in two runs.

He also had two hits in Eastside Catholic’s 1-0 victory over second-ranked Mount Vernon earlier in the day.

“It felt great,” Gillespie said. “The defense backed me up. The offense got on it after a couple innings and energy was up. We did (well).”

Gillespie allowed only one run on two hits and was the second Eastside Catholic pitcher to throw a complete game Saturday.