Coach Larsen announced that Senior SS Kollin Malsam (Eastside Catholic HS) has become the first A’s senior to declare where he will be playing next season. Malsam has chosen Washington State University. “I’m so excited for Kollin. It’s a great opportunity for him to play for some great coaches and get the chance to play Pac 12 baseball. So happy for him” said Larsen. Kollin will join a Cougar team lead by veteran Head Coach Donnie Marbut who is going on his 11th season at the helm for the Cougs. In his 11 season as the Head Coach, he has lead the Cougars to 2 NCAA Regional appearances and averaged almost 30 wins a season in his tenure.

The Washington State staff also has strong ties to the 18u A’s Coaching staff, As current Assistant Coaches Joe Ross and Greg Swenson were both Coaches at the University of Washington when Coach Larsen, Everitt and Dunn were Huskies.

“Kollin is easily one of the most improved players I have seen in my 6 years of Coaching. His work ethic, drive and determination have all got him to this point and it’s great to see that it has paid off with this opportunity for him. His mentality will help him succeed at the next level” said Coach Larsen.

The senior (Malsam) will play a pivotal role in the success of this years A’s. “It’s the youngest team by player age that we have ever had on the 18u team. We only have 6 S 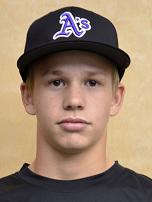 eniors on the roster this year, and Kollin will be looked upon to lead this infield group and the line up with his bat. We are expecting big things out of Kollin this summer.”

Malsam and the A’s are about to part for the High School season, but the A’s will regroup in May and begin the 2015 campaign in late May.