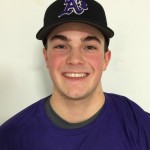 The Washington Athletics are proud to announce that 6 players were named to their respective All-League teams. Leading the way was Sammamish HS SR. Tristan Cates, who was named 1st Team Second Baseman in the 3A/2A KingCo League.